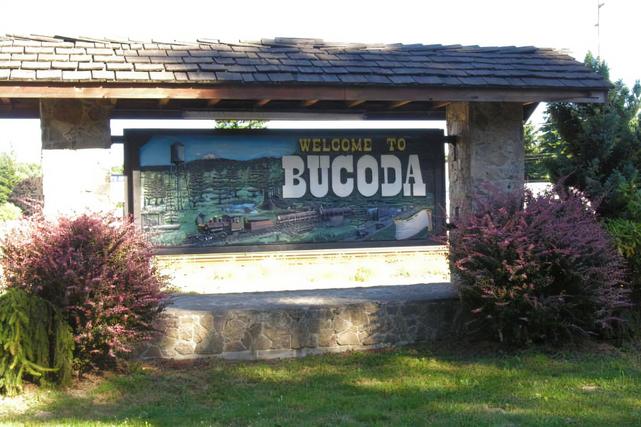 Bucoda is a town in Thurston County, Washington, United States, with a population of 562 at the 2010 census.

The first American settler at what is now Bucoda was Arron Webster who arrived in 1854. In the 1860s Webster sold his claim and sawmill to Oliver Shead, who officially named the settlement "Seatco", a native word said to mean evil spirit or devil. Later the Town was renamed Bucoda using the first two letters of each of the surnames of the three principal investors in local industries: Buckley, Coulter, and David.

The Northern Pacific Railroad located a station at Seatco in 1872. In the 1880s investors began operations to mine coal in the area, but the coal was of poor quality and operations were sporadic. From 1874 to 1888 Bucoda was the site of Washington's first territorial prison. It garnered a reputation as a harsh institution, as the inmates were used for dangerous and brutal manual labor in local industry. It was discontinued when the state opened the Washington State Penitentiary in Walla Walla.

Bucoda was officially incorporated on June 7,1910. The town had a water tower that was scrapped in the early 1980s. The Mutual Lumber Mill was so productive the town was once billed as the "Town with the Million Dollar Payroll." The Mill burned down and was rebuild only to have demand wane and once again it was consumed by flames.

Town Hall is located at 101A East 7th Street, at the corner of 7th Street and Main Street,

in the lower level of the Community Center.

We close as necessary for training, vacations, and comp/sick time, and any changes

to normal operations will be posted on the Town Hall door.